This morning started with a visit to Reception.  Overnight I was cold (??!!!!!) as the air conditioning had been running all day the day before and had worked a little too well, and on the beds is a top sheet only, no blankets, and none in the cupboards at all.

The women at Reception were fantastic and called it through straight away and by the time we got back from breakfast, there were 4 wrapped up blankets sitting on the doorstep waiting for us.

Breakfast was fantastic!  We lined up to sign in and a lady came over and took us to a table while Jase signed in.  I was really impressed with how they handle the number of guests.  There are so many people on the island, it’s fully booked, and yet dealing with us all appears effortless (which of course is not the case).  Food is constantly being turned over and replaced, and waitresses are walking around pouring coffee and tea.

Breakfast is a pretty impressive buffet including some of the best hash browns I’ve ever had (could be that they are deep fried in fat which makes them sooooooo good but soooooo bad at the same time), lamb sausages, an egg station and a continental station.  Lots of fresh fruit, and a row of juice machines complete the buffet area.

Zac amazed me with what he put away for breakfast.  He’s a skinny wee lad, and just loved being able to eat whatever he wanted, instead of “marmite on toast”.  He ate 8 hash browns, and two fried eggs this morning and about 5 sausages.  I was seriously intrigued watching him methodically work his way through two full plates of food.

After breakfast we wandered back to the rooms, where I set up the blankets on our beds.  We played cards for a while, and then decided to go for a swim.  We packed up sunscreen, towels, water bottles and books and headed for the beach.  There was a lovely shady spot under a coconut tree that was just begging to be blobbed out on, so we claimed it promptly.

The water was cool when we first got in but we quickly got used to it and it was just magic swimming in the crystal clear turquoise water.  There was really no waves or swell at all today, it was so still and sunny, just perfect in every way.  Jase and I got out in about an hour and lay on the beach drying off while we read our books and watched the boats coming and going to the jetty.  The kids kept swimming until lunch time, little fish that they are!

We called them in and headed to the main restaurant to check out what kind of sustenance was offered.  Lunch was a-la-carte and with our meal plan we could have one main each off the menu, anything else we had to pay for.  We ordered a round of cokes (we always have coke when we travel, it’s compulsory to ward off evil tummy bugs and food poisoning and has served us well in the past!!!!) and then ordered lunch.

I had spicy chicken nibbles and island fries.  They were tasty but a small meal.  Perfect for myself and the girls, but for Jase and particularly Zac who crashes badly if his blood sugars go down too much it really wasn’t quite enough food.  But that was okay as we had brought over plenty of snacks and made sure to feed him up in the middle of the afternoon as well.

After lunch, we played cards again (it’s becoming very competitive and strategic!) and then the kids found some coconuts that had fallen off nearby trees and decided to open them.  I laughed at them, remembering back to the years we had tried to do the same thing on Mana Island, but wow, that Caitlyn is a tenacious creature!

She then pulled it fully apart, drunk the remaining juice and then dished out portions of fresh, absolutely delicious coconut flesh.  It was amazing!  The younger kids were re-energised by this successful quest and continued on with gusto.  Amber managed to get one open and then Zac did, although his was rotten, which I have to say is one of the more disgusting things I’ve seen and smelt in recent times.  The kids were stoked with their win and very hot and sweaty by the time they finished, so we headed for the beach.

We went to the Dive Bure down by the beach and asked for some snorkelling gear.  It’s free to hire, but you can only take out a set for an hour, which is quite different to when we were growing up and you’d get a set on arrival and keep it for the whole week.

Next time we go, I intend to buy us all a set of snokel gear so we never have to wait around, sign gear out, be back in an hour and put up with sometimes shoddy equipment.  I observed that the staff member behind the counter was fairly ratty, and asked if she’d had a good day.  She told me that she was sick and tired of guests using stuff, not giving a toss about it and returning it broken and not even mentioning it.  I get that, and felt quite sorry for her.

We took our flippers, masks and snorkels and headed down the beach.  There are two pontoons off the beach.  One is in front of the main area of the resort, where all the water activities are held, and the other is quite a long way out and in a quieter part of the beach.  We headed for that part of the beach, and gave the kids a lesson in using their snorkel gear.  I was delighted when they all grasped the concept easily and started bobbing around in the water, breathing heavily through their snorkels.

After we decided they were comfortable and proficient enough, we headed towards the pontoon, which was in really deep water.   There was no reef there, just wee mounds of coral in different places, but it gave the kids a good introduction.  We decided that we’d take them on the beginners snorkel tour tomorrow, it’s FJD$20pp for an hour which I thought was great value.

We then found that the channel in to the wharf was man made, and there is a reef along the edges, so as long as you stay on the reef side, you can still snorkel straight off the beach and see some great displays of tropical fish.  The reef is badly damaged due to people standing on it, and climate change which bleaches the coral.  It was pretty depressing to see when you know what it used to be like.  The kids of course, know no different, and loved every moment.

After our hour snorkelling, we returned the gear and the kids went back into the sea for another swim and play around.  They were weaving their way along under the jetty posts, chasing fish and having an absolute ball.

Dinner this evening was a Mongolian BBQ.  Rows of vegetables, raw meat, seafood, noodles, rice and condiments were set up, and you were given your main plate with a paper plate over the top where you put all the raw stuff.  You then lined up and the chef tossed it all into a wok and cooked it up for you.

I went slightly overboard with the fresh green and red chillies, which I regretted as my whole face and mouth burned while I ate, but it was simply delicious.  The kids all loved it too, which surprised me, I thought Zac would turn his nose up at it but he had a huge feed.  Being under 12, he’s able to eat for free at the kids buffet too, but it was really for younger children, featuring chicken nuggets and hot chips and he really enjoyed the adults selection. 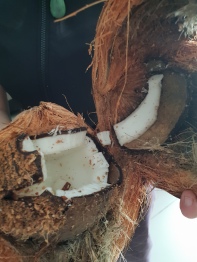 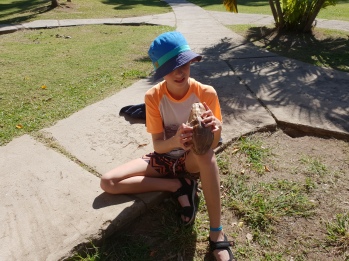